This vehicle is unusual as it features chrome wheels, a chrome radiator shell and a colour coordinated steering wheel. Apparently it had a head gasket problem at the time of the auction. It also appears to have been exported from the UK, possibly in 2011. 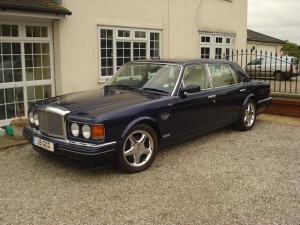 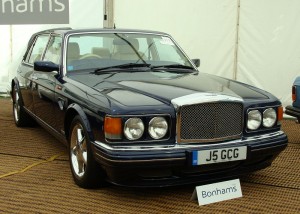 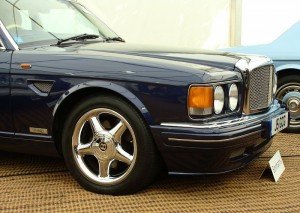 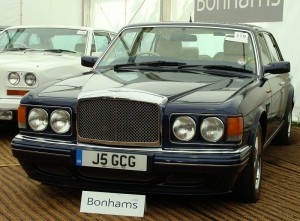 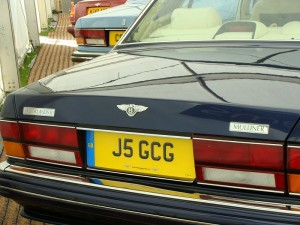 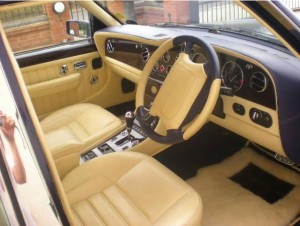 By the end of the 1980s, Rolls-Royce’s re-branding of Bentley, begun in 1982 with the launch of the Mulsanne Turbo, had proved an outstanding success. However, the sales graph that had climbed steadily upwards throughout the decade, reaching its peak in 1989, would plunge dramatically within just a couple of years because of economic recession. Rolls-Royce responded by rationalising the Bentley range, dropping the normally-aspirated Mulsanne and Eight saloons and introducing the evocatively named Brooklands, the latter being in effect a Turbo R minus turbocharger but retaining the R’s sports suspension and adaptive damping control. The Brooklands was upgraded with the 300bhp ‘light pressure’ turbo-charged V8 engine for 1997 but remained in production for just one more season. For 1998, by which time it was the only model available with the old ‘short’ wheelbase, the Brooklands gained the Turbo RT’s firmer suspension and five-spoke alloy wheels, becoming the ‘Brooklands R’. As parent company Rolls-Royce prepared to phase out these older models, a final derivative – the Brooklands R Mulliner – was announced. Coachbuilder H J Mulliner had been part of the Rolls-Royce family since the late 1950s and was merged with Park Ward soon after. The firm had been responsible for the sublime coachwork of the first Bentley Continental of 1952, and Rolls-Royce would seek to re-establish this historical link to the Bentley marque with a succession of ‘Mulliner’ badged models. Only 100 of these specially trimmed and furnished Brooklands R Mulliner models were made during 1998 before production ceased at the end of that year.
Number ’22’ of the 100 made, this Brooklands R Mulliner was acquired by the lady vendor’s late husband in 2003, passing into her owner ship in 2009 following his death. Regularly serviced and MoT’d, the car has seen relatively little use over the past few years and is described as in generally good/very good condition. Finished in Peacock Blue with ivory leather interior, it comes with current MoT/tax, Swansea V5C document and the original hardback book recording its specification. Post-factory upgrades include satellite navigation, DVD/CD player, parking sensors and a television.

Following inspection it has become clear this car has an engine problem, which we believe to be a blown headgasket. Having discussed the matter with the vendor, it now has a revised estimate of £14,000 – 18,000.