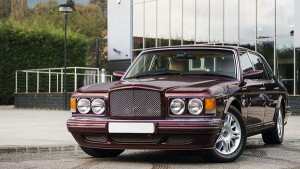 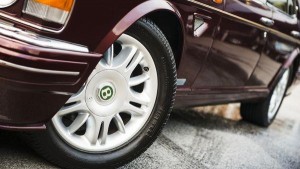 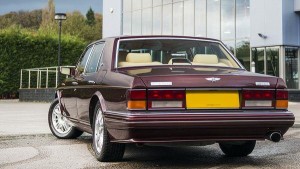 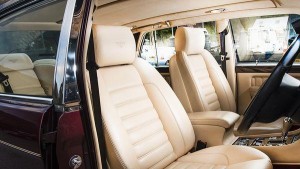 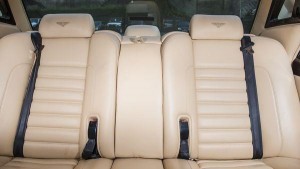 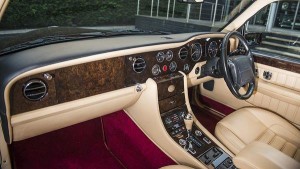 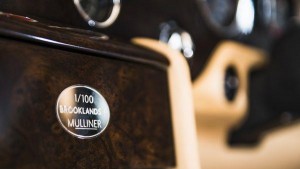 From the advert description:

The Bentley Brooklands R Mulliner was a limited edition of 100 long wheelbase cars produced in the late nineties, just prior to the the introduction of the Bentley Arnage.
This vehicle is Number 1 of only one hundred, as indicated by a plaque on the centre console.
Introduced in 1992, the Bentley Brooklands replaced the Bentley Eight and Mulsanne models, and featured the same styling, features and Rolls Royce V8 engine as the Bentley Turbo R, albeit without the turbocharger.
The design retained the angular theme common to Bentley models of the period, as well as features such as the dual headlamps and wraparound parking lights. The trademark descending bootlid and chrome B-pillars were also retained.
The interior was altered slightly from previous models, with more curved design elements, and the gear lever moved from the steering column to the leather-wrapped centre console. The classic Bentley wood grain trim was augmented by lighter-colored engraving to the door panels.
Compared to the standard Brooklands R, the Mulliner variant gained a number of sporting features, including a sports grille, colour coded bumpers with chrome tops and a lower mesh front spoiler, side air intakes, badges, new 18” wheels with 285/45 tyres and subtle improvements to the interior trim.
Finished in Ruby Red Mica, this stunning example boasts a beautifully appointed interior in Magnolia Hide complemented by dark wood veneer adorning the dashboard, and interior fascia surrounds in chrome.
The vehicle was registered on 3rd November 1998, and is supplied with a comprehensive service history. The Bentley has had four previous owners and the total mileage is 40,906.
This is an exclusive vehicle with a unique history, and as Number 1 of a series of only one hundred cars of its type, it is extremely collectable.

This beautiful Bentley Brooklands R Mulliner is number 1 of 100 of a limited edition. Finished in Magenta metallic with complementing leather interior which is completely unmarked is offered for sale. …..