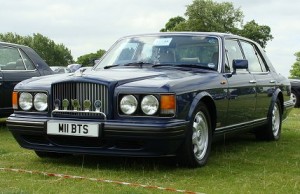 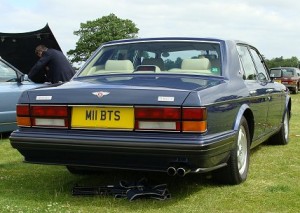 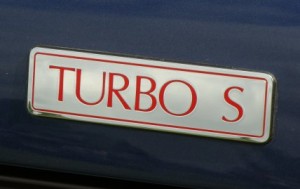 The Bentley Turbo S limited edition was launched in 1994 with substantial revisions over the outgoing Turbo R including a new engine management system incorporating Formula One technology, a new induction system with liquid charge inter-cooling and revised interior and exterior. With the revised engine and tyres 155mph was achieved without difficulty, accompanied by a power output of 408bhp and torque of 616ft/lb which was transmitted via a viscous rear differential to make it more useable. It is interesting to note that the Turbo RT and RL that followed the Turbo S and were built in greater numbers had a lower output engine fitted.

This car was first registered 1st January 1995 to Sir Richard George, Chairman of Weetabix Ltd and has subsequently had interesting ownership including an Italian Count and Bank of America Director who I bought the car from.

The car is finished in Cobalt Blue metallic with a Parchment hide interior piped in blue. The dash rolltop is blue with dark stained burr walnut veneer dash and door cappings. In all cases the body, hide and woodwork are immaculate.

I have the original advertising material for the car showing the standard retail price of £147,500.10 before options as well as the precise build sheet from Bentley which shows additional options fitted and the Mulliner Park Ward paintwork variation.

The car has the cherished registration of M11 BTS which was chosen for the vehicle and will remain with it.

I have every service receipt for the cars history to date as well as the service book which shows a full and comprehensive history for the car. The first year of history is with the supplying dealership; Michael Powles of Leicester followed by nine years up to 2005 with Jack Barclay, London which speaks for itself. The last five years are with Nigel Sandell, a Rolls Royce and Bentley specialist of some repute and expert advisor to the Rolls Royce Enthusiasts Club. He maintains James May’s Rolls Royce of Top Gear fame amongst others which I think says something for his reputation. The car’s history is supplied in a Rolls Royce / Bentley folder and shows fourteen services and a number of other visits for maintenance work. I can of course provide further information if you wish.

I am a member of the Rolls Royce Enthusiasts Club and have been to a number of static rallies during my ownership of the Turbo S. I have yet to see another Turbo S even at the annual rally at Rockingham Castle where there were nearly 1000 vehicles present! It is a very rare motor car and attracts a surprising amount of attention. Presently I have four cars and may shortly be adding a fifth. However, my storage room is limited and for that reason I have reluctantly decided it is time for someone else to have some enjoyment from this fantastic motor car.

The car is for sale at £19,000. At the asking price the vehicle will be supplied with an indoor tailored car cover, an outdoor weatherproof breathable tailored car cover (purchased recently for £430 and used four times), badge bar with a number of limited edition badges and two brand new sheepskin front tailored rugs (£250). The value of the car is backed up by an official valuation from the Rolls Royce Enthusiasts Club. I am happy to supply any further information or photographs you require and more than happy for the car to be inspected by your specialist / mechanic etc.

The car has covered 66,000 miles and comes with road tax to Feb 2012 and an MOT to June 2012. It has just had a major service including replacement of the head gasket (a common issue on Turbos) and an air conditioning service.

Please do not contact me with ridiculous offers or if you are a dreamer or test pilot. I am of course willing to consider sensible offers but believe the car is priced fairly on condition and provenance. I spent over a year looking before I purchased this car and that careful searching has rewarded me with rewarding and reliable motoring. Please look at other Bentley Turbo R/RT/RLs before you see mine and you will see the difference in condition between them!