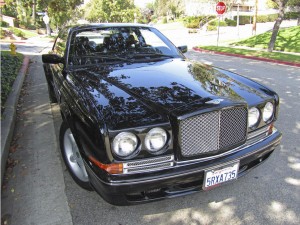 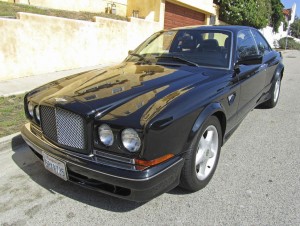 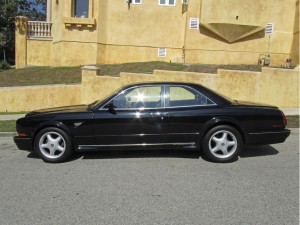 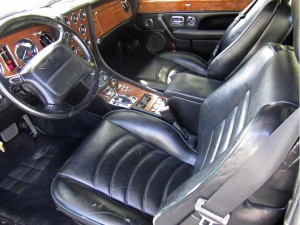 2000 Bentley Continental R Millennium Edition
Chassis no. SCBZ22EXYCX163310
Bentley’s 1980s resurgence had hitherto relied exclusively on models whose basic architecture was shared with other Rolls-Royce products; but on display at Geneva in ’85 was ‘Project 90’, a mocked-up coupé intended to gauge public response to the idea of a high-performance car unique to Bentley. When the real thing – the Bentley Continental R – was unveiled six years later, the waiting crowd burst into spontaneous applause. Styled with the assistance of consultants John Heffernan and Ken Greenley at Worthing-based International Automotive Design, the Continental R benefited from computer-aided design and wind tunnel testing in the devising of its sleekly streamlined shape. Despite the need to incorporate non-traditional features such as doors recessed into the roof, the result looked every bit a Bentley, albeit one restated for the 1990s. Also new was the gearbox, a four-speed automatic with an ‘overdrive’ top ratio, but the main focus of interest was the newcomer’s performance. Needless to say this was outstanding, the combination of the 325bhp Turbo R engine in the new wind-cheating shape cutting the 0-60mph time to under 7 seconds and boosting top speed to around 150mph.

As if that wasn’t enough, there was even more performance available from the follow-on Continental S and Continental R Mulliner versions. Introduced at Geneva in the spring of 1999, the latter was the most powerful Bentley after the Continental T, boasting a maximum output of 420bhp and a staggering 650ft/lb of torque, the latter delivered at all of 2,200rpm. The 0-60mph time dropped slightly, to a fraction under 6 seconds, while top speed went up to 167mph . Improved suspension, quicker steering, switchable traction control and massive 18″ diameter wheels helped keep the 5300lbs plot under control. Only 46 Bentley Continental R Mulliners were made between 1999 and 2003 at a basic price of $300,000, although as each was produced to individual customer order there was considerable variation.

The example offered here is second of ten ‘Millennium Edition’ models built, finished in black with an interior tailored in black Connolly leather hides with green piping and rich burl walnut. Flared front and rear fenders rounded out a more aggressive stance that was complimented by a stainless steel laser cut matrix grill at the front and a green starter button in the center of the dash.

Shortly after arriving from the factory, this Bentley had a place in the spotlight as a showcar at the 2000 LA Auto Show. Under the care of the vendor for the last ten years, this big coupe is a true velvet hammer that will rocket its passengers around in sublime luxury and comfort.